Information from the discussion on Vestec Centre 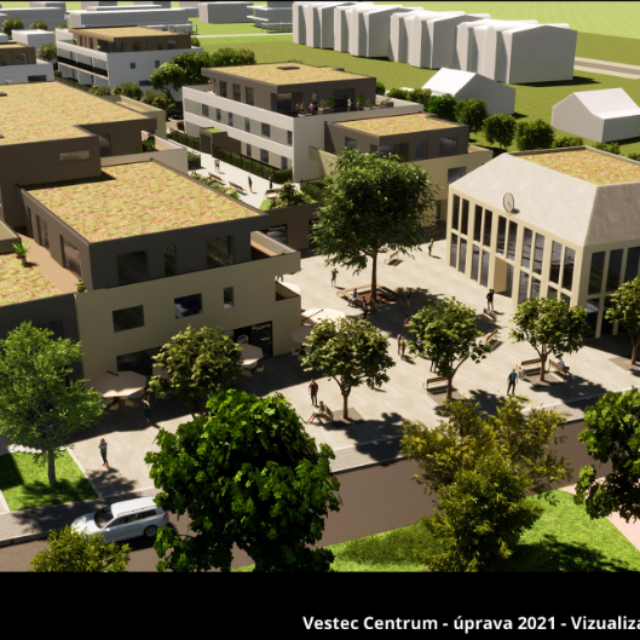 Thank you to all participants for the constructive discussion on the design of the new "square" in the Vestec Centrum project. For those who could not attend, here is a summary.

The discussion concerns the area near the Vestec post office, whose strategic location directly encourages the possibility of creating a central part of the village in which services for citizens could be concentrated - post office, municipal office, public spaces and various shops or services. The area now belongs to a private investor who is willing to hold discussions with the municipality and modify his building plan for the benefit of the citizens of Vestec.

The area is divided into 3 parts - from the view from Vestecka there could be first a public space with the municipal office building, behind them a closed block with apartment houses, then a central part with apartment or terraced houses and a southern part with family houses. All three parts are separated in the proposal by a road network with a connection to Vestecka Street.

In particular, the following comments were made by those present:

Have you thought of anything else about the presented project? You can give us your suggestions in writing until 30 November 2021. On the basis of all suggestions, a revised project will be developed and presented again to the public.

If the citizens and the investor agree on the form of the Vestec Centrum project with the proposed public space with centralized services, the zoning plan must be changed in a shortened way. The current zoning plan allows the investor to build, for example, family houses with 3 residential units or a multifunctional building with commercial premises.

Let's not let this perhaps the only chance we have to create a dignified centre in our community pass us by.