September is here again, the month usually associated with the start of a new school year. The school gates open and new or rested pupils sit down to expand their brains.

It is from my first school memories that the theme of today's story will be based.

One autumn day, when I was a first-grader in a school in Jesenice, our teacher introduced us to a new classmate. He was a bit different, with brown skin, dark eyes, a thick black hair on his head and he didn't speak much Czech. His name was Miches and he was Greek. We called him Mischa. He moved with his parents and siblings to Vestec.

Where did he come from?

Between 1946 and 1949, a civil war raged in Greece, causing the emigration of more than 80,000 people to the former Eastern Bloc countries. The mountainous areas of northern Greece in particular were then controlled by the political left, led by the Communist Party. Their opponent was the right-wing monarchist government, supported by Great Britain and later the USA.

First, children were evacuated from their Greek homeland with a small number of adults accompanying them. In post-war Czechoslovakia, which itself was not in a good economic situation, detention centres were prepared for them in Mikulov and Mariánské Lázně. After 1949, the adults were evacuated and found temporary accommodation in the detention centres in Svatobořice near Kyjov, Mikulov and Lešany near Benešov. Later on, the Greeks were dispersed throughout Bohemia and Moravia, reaching their greatest concentration in the Krnov, Jesenice and Žambersk regions.

In 1957 several Greek families moved to Vestec. The state farms provided them with modest accommodation in former farms (No. 10, No. 12) and also employment in the farm. Thus, the Damianidis, Yakovidis and Papadopulos could only remember their olive and tobacco fields in Greece and had to reorient themselves towards collectivised Czech agriculture. Only letters or parcels could remind them of their distant home, the contents of which - mainly olives, decorative beads (komboloi) or even tobacco seedlings - were a small psychological patch, but an unusual phenomenon for the locals. The Greek families got on well with the locals, adapting to local conditions. The friendships formed lasted long after they moved away.

Greek immigrants and their descendants had to wait for 30 long years after the end of the civil war before they were finally officially granted the full right to return to their homeland in 1982. 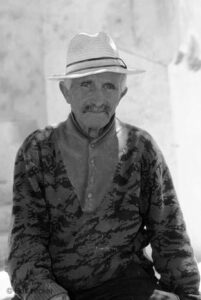